Purple and Nine: A great comic for tween girls! 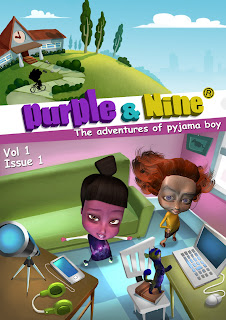 My 11 year old had a great opportunity to read & review “Purple and Nine” Vol. 1 issue 1 & Vol. 1 issue 2 comic books today provided by Gangly Sister. Thank you Gangly Sister for this opportunity. While my daughter was reading these comics, I heard giggles, and I saw my daughter really getting into them. When she was done reading, I saw her with a big smile. Then I asked her if she is interested in reading it’s 3rd issue, she immediately replied with an answer, “YES!”.

I was thrilled to hear her say that she enjoyed these comic books. In college I was in the STEMS program. I truly believe that a comic book like Purple & Nine would help girls to consider a field in STEMS. Since this book is geared towards girls ages 8-12,  I asked my daughter to give me a quick review of the books.
My daughter wrote:
“The comic book, Purple and Nine,  is very educational and has made me consider the technology and science field. When people need help, Purple and Nine put people before themselves and do everything they can to solve their issue. When trying to solve the issue, it takes a lot of science and technology like the Gravitylight and the Luminad. The solutions to the problems are healthy to the Earth and help prevent later problems in the future.
In both books the problems were realistic. They could actually happen. Purple and Nine set out to solve those issues to help people. They are both good role models to kids my age and show that anyone can make a difference.
I think kids my age would enjoy this book. It has a good message and makes kids think about other places or people in the world and their town or city. Purple and Nine is a very good comic and is a good choice for kids my age to read.  It was a fun read. “
As a mother of two girls, I believe that girls need positive encouragement towards their future goals. I believe that this comic will definitely help girls out there to pursue their goals in STEM after reading Purple and Nine. At least my daughter was persuaded by it after reading the comics. Two thumbs up from me.
If your girls are interested in reading Purple and Nine’s first 3 issues, they are available for a purchase via http://www.ganglysister.com/comics/
You can also watch Purple and Nine’s cartoon episode on youtube: https://youtu.be/hz747Z50cg0

Please read the press release for more information about Purple and Nine below: 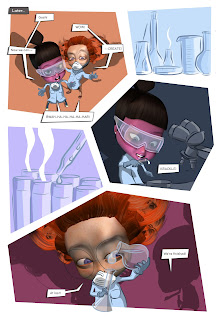 Las Vegas, Nevada, October 15, 2015:  Gangly Sister announces the release of Purple and Nine, a comic book featuring non-geeks who love science and technology. The mission of Gangly Sister is to encourage girls in STEM and to transform how girls are portrayed in the media.
“Everybody knows that if you dress fashionably, you can’t be that smart,” said CEO Rebecca Rachmany when interviewed from her home office, to which she regularly wears gym clothes. “We wanted to do something ridiculous—like having girls who enjoy inventing things, and having characters who are intelligent and also have great social skills.”
The comics themselves are outrageous. There’s no violence or sex in any of them. The 10-year-old characters are neither frighteningly thin, nor do they have large bosoms. The characters are also oddly multi-dimensional and don’t fall into categories children relate to like “mean girl,” “geek”, “popular kid”, “jock”, or “social reject”.
Rather the characters, two girls named Purple and Nine, spend most of their time trying to figure out how to help their fellow classmates using a variety of technologies, most of which really exist. Unlike dumbed-down science programs to show girls they “can do it”, the comic books are somewhat sophisticated, assuming that children of both genders have fully functional brains.
“How many princess stories can you read?” asks protagonist Nine Helix. “And why don’t any of the girls in books and movies have a best friend? It’s just weird. Purple and I decided even we could write a better comic book than the ones where they go shopping and get a boyfriend. Yuk.”
“Actually, this was just another one of Nine’s crazy ideas,” claims Purple Isosceles, Nine’s best friend. “When Nine’s mouth opens, which is often, it usually means I’m going to do some big robotics project and Ferret is going to make a mess, filing my room with every technology known to man. Don’t tell my parents about the Ferret. Or the mess. They are going to totally have a hairy when they find out about this.”
Follow Us

Shop
Please note that the links below point to our affiliates and any sales made will reward us a small commission. This helps maintain our blog at no extra cost to you. Thank you for your support!

This website uses cookies to improve your experience while you navigate through the website. Out of these, the cookies that are categorized as necessary are stored on your browser as they are essential for the working of basic functionalities of the website. We also use third-party cookies that help us analyze and understand how you use this website. These cookies will be stored in your browser only with your consent. You also have the option to opt-out of these cookies. But opting out of some of these cookies may affect your browsing experience.
Necessary Always Enabled
Necessary cookies are absolutely essential for the website to function properly. These cookies ensure basic functionalities and security features of the website, anonymously.
Functional
Functional cookies help to perform certain functionalities like sharing the content of the website on social media platforms, collect feedbacks, and other third-party features.
Performance
Performance cookies are used to understand and analyze the key performance indexes of the website which helps in delivering a better user experience for the visitors.
Analytics
Analytical cookies are used to understand how visitors interact with the website. These cookies help provide information on metrics the number of visitors, bounce rate, traffic source, etc.
Advertisement
Advertisement cookies are used to provide visitors with relevant ads and marketing campaigns. These cookies track visitors across websites and collect information to provide customized ads.
Others
Other uncategorized cookies are those that are being analyzed and have not been classified into a category as yet.
SAVE & ACCEPT